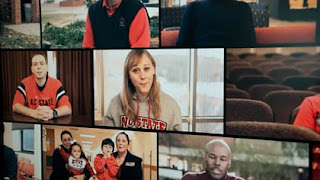 A documentary by Will Lamb (’11), featuring members of the Wolfpack family rallying together in support of NC State’s GLBT students, faculty, staff and alumni, has drawn international attention while helping to shed light on change and acceptance blossoming across campus.

Based on the common stereotypes and controversies surrounding both communities, Lamb – an ROTC scholar who will be commissioned as a second lieutenant in the U.S. Army following his May graduation – might seem like the last person who would pour hours into a film highlighting the university’s GLBT and ally community.

But for Lamb, a communication media major and president of NC State’s Union Activities Board, the paradox is one that’s impossible for him to realize.

“My dad is in the Army, so we moved around a lot, as you can imagine,” Lamb said. “Through the years, my parents have always commented on the fact that I’ve had the most incredibly diverse group of friends.

“Gay friends, straight friends, it’s no different to me,” he said. “I was raised to judge people not on their orientation, skin color or anything else – but on their character alone.”

Following October’s “Ally Rally,” Justine Hollingshead, director of NC State’s GLBT Center, reached out to Lamb to discuss joining the national It Gets Better movement, helping to bring a message of hope to those who needed it most in our community.

According to statistics, 9 out of 10 GLBT students have experienced harassment at school. In addition, GLBT teens are bullied 2 to 3 times as much as straight teens, and more than a third have attempted suicide.

“Will, based on stereotypes, is probably not someone you’d pick out of a crowd to be a supportive ally but, having spent time with him in his role in UAB, I knew that to be false,” Hollingshead said. “Given his background in film, theatre and the arts, he had the perfect blend of someone that understands people, is supportive, and just gets it.

“It speaks volumes when you have a member of the ‘straight’ heterosexual ally community putting together a piece to support the GLBT community,” she said. “To have someone like him on your side and standing up for equality goes a long way.”

Hollingshead showed Lamb an It Gets Better video produced at another university, in hopes of gauging his response while sparking their combined creative interests.

Lamb began his film career while still in high school, putting together a series of documentaries for his cross-country team.

“It was well done and the people had good stories, but it felt very stilted and didn’t feel quite as authentic,” Lamb said. “They shot at a studio instead of on location, so it felt really detached from the people who were interviewed for what was a very important story.

“In talking with Justine, we knew we had to ground this thing in reality and on our campus – it’s about NC State students, staff, and faculty past and present, so it had to be real.”

Hollingshead quickly went to work, coordinating the schedules of 39 members of the NC State community in hopes of getting them to not only share their story, but to put it on the “permanent record,” so to speak.

“I wanted something that would last forever and that people would be able to see at any time,” she said. “It was also important that it be from NC State, and not just the GLBT Center or members of the community itself.

“I did not want the message to be coming from the GLBT community, but rather all of NC State,” Hollingshead said. “When the idea was pitched to the Chancellor and Provost, they were immediately supportive and never hesitated, which meant a great deal.”

The resulting 14-minute film allows viewers to get to know – and positively identify with – a diverse sampling of NC State students, faculty, staff and alumni. As of this writing, viewers have watched the YouTube version of the video more than 10,000 times.

“We have received hundreds of emails and notes about the positive impact,” Hollingshead said. “Recently I had the opportunity to talk with an administrator at a school in Tennessee.

“She had seen the video and made comment at how it elevated her perception of NC State,” she said. “It spoke volumes to her that our whole university community – faculty, staff, students, allies, alums, the Provost, and the Chancellor – all came together for a united message, that we do not tolerate discrimination of any sort, everyone is welcome, and this is a great place to be.”

As Lamb prepares to leave campus for active duty as an officer in the U.S. Army Signal Corps (which provides and manages communications and information systems support for the command and control of combined arms forces) he’s proud of what he’s accomplished both in and outside of the classroom during his time at NC State.

“I’ve come so far in four years, as far as how I’ve been able to develop my talents, my leadership skills, and my thinking as a person,” he said. “To do something with our GLBT Center was a no-brainer.

“I had no fear of repercussions from the Army,” Lamb said. “It’s not our place to comment on ‘Don’t Ask, Don’t Tell,’ but I have absolutely no problem with people who are different than I am.

“At the end, people are people, and there’s nothing about anybody’s skin color, gender, or orientation that is off-putting to me,” he said. “There’s nobody I can’t get along with.”

Indeed, a documentary can only shed a limited amount of light on its subject matter, so Hollingshead – who has served as director of the GLBT Center since its creation in 2008 – hopes NC State alums; students, faculty and staff currently on campus, as well as future members of the Wolfpack family will experience the changes for themselves.

“It is better, and continues to get better every day,” she said. “We are intentional about our efforts and work together to solve problems.

“This is the place to be, and we are doing the work to make sure all people feel welcome here.”

Editor’s Note: In addition to the abridged version of NC State’s It Gets Better documentary (below), a full-length (14:12) version can be found on YouTube. Will Lamb’s photo by Jon Gamble.