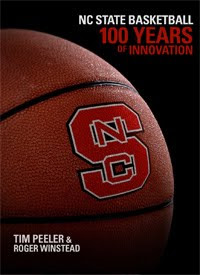 CHASS alums Tim Peeler (English ’87) and Roger Winstead (Communication ’87) vividly illustrate the many traditions and innovations that have shaped Wolfpack basketball as well as the history and customs of college basketball itself in their new book NC State Basketball: 100 Years of Innovation.

Like NC State basketball, Peeler and Winstead’s friendship has a rich history. Peeler first came to NCSU as a mechanical engineer major, but after three semesters, his interests led him to the English department, where professors like Rod Cockshutt encouraged him to follow his journalistic aspirations. “After I changed majors, my whole student career became focused on developing into a newspaper reporter,” Peeler said. “I took my reporting aspirations to the Technician and the Agromeck, and that’s where I met Roger.”

Winstead came to NC State with the dream and determination of becoming a photographer. “In high school I was a radio disc jockey, but I knew I wanted to transition to photography,” Winstead said. “I majored in Communication because that would allow me to work with any type of media.” Winstead also found the Technician and the Agromeck to be useful avenues to develop his portfolio and friendships.

For more than 20 years Peeler worked as a news reporter before coming back to NC State as the managing editor of GoPack.com, NC State’s official athletics department website. “NC State basketball was a huge part of my childhood and life, even before I became a student,” Peeler said. “In my news career I covered lots of schools and tournaments, but it was nice to come back to my alma mater.”

After graduation, Winstead also sought employment in the newspaper industry. He worked for 10 years at the News & Observer capturing Final Four tournaments and presidential inaugurations. Winstead came back to NC State in 1998 as Director of Photography.

Through the years, various jobs, and the general chaos of life, Peeler and Winstead never lost touch. As the 100th year of basketball at NC State rolled around, Peeler began to piece together a book, and he said it was only natural to ask his longtime friend to contribute as picture editor and designer. “When you look at the full scope of what NCSU has done – it’s amazing,” Peeler explained. “I wanted to make sure our school’s basketball story was told.”

Peeler spent many long nights and weekends writing stories and going through old archives, while Winstead gathered long-forgotten pictures and designed the book. “It’s amazing to finish a book and see it complete,” Winstead said. “It’s real, tangible, and will forever be a part of the history of the world.”

NC State Basketball includes historical context and photographs that demonstrate the many college basketball traditions made famous at NC State, including cutting down the nets, spotlighting players during introductions and even the alley oop. Peeler and Winstead also recount renowned Wolfpack players and coaches who have passed through the doors of Thompson Gymnasium, Reynolds Coliseum and the RBC Center in the book, from Ronnie Shavlik and David Thompson to Sidney Lowe and Julius Hodge.

Peeler and Winstead will discuss their new book and have a book signing on Thursday, November 4, at 7 pm in the Assembly Room, East Wing, D.H. Hill Library and on Saturday, November 13, at Carter Finely Stadium.